Follow Ken and Deb on their
Adventures in Faith

where are we now?

at the trailhead OF theiR ADVENTURE...

Fast forward forty-six years:  Buried deeply on the harddrive of Ken's brain, the Winnebago brand popped “on screen” again.  Reflecting on that "light bulb" moment, we [now] believe the Lord had a Big Part in planting this seed.  As we approached retirement age, both Ken and Deb acknowledged their mutual drive to travel and experience America, people, and cultures.  As a kinduva personal challenge, they made a demanding list of the fifty things that they would want in a motorhome.  "Ha!" they thought, "...Fifty things?!?"  "No way!"  While it was likely a disguised exercise in justifying their NOT buying a motorhome, the fact that if we actually found one that met all fifty criteria and that we could afford, would make it a pretty nice unit to adventure in.

After many, many hours of on-line research and visits to lots and lots of lots, they were affirmed that owning a motorhome would complement their lifestyle and partnership.  A number of things were made obvious:

1. Decades ago, Deb and Ken fell in love while traveling and exploring.  Yea, it was in a 1966 Corvair and [once or twice] a 1968 VW Beetle, but in their roots together were travel and hiking and exploring.  It would be a whole lot of fun to be able to acknowledge and revitalize those roots.

2. RVs are a lot more livable now than they were when Ken saw his first Winnebago.  They are easier to drive, very well-equipped, and truly akin to a small condo ... on wheels.

3. They calculated that they could afford a motorhome.  Maybe not a new one, but certainly a “Previously Adventured” motorhome.  WooHoo!

4. The RVing community is undoubtedly one of the most friendly group of people you will ever meet.  Always happy to share their experiences and even help out when needed.  In every personal face-to-face encounter Deb and Ken had with an RVer, they were welcomed, nurtured, and encouraged.  ...Like instant "family."  Many RVers recite that the road-trippers they have met "on life's highway" have often become the closest friendships they've had. 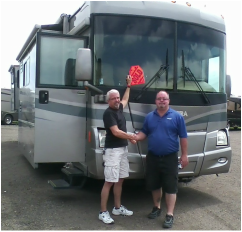 5. Over 1.2 million RVers are Full-Timers.  Their lifestyle keeps them on-the-road all year, every year.  They travel north in the summer and south in the winter.  The lifestyle allows for extended stays in luxury resorts or boondocking in the desert.  They change their front yard simply by pulling up the levelers and driving away.  The extended time in any campground was attractive to Ken and Deb since it would allow them to fully immerse themselves in local culture.

6. It was not until the Blessing became obvious to them that they realized their passion for travel and exploring could complement a part-time ministry in service to others. And they could do it while full-timing on-the-road.  Wow!  What a fantastic way to serve the Lord!   "THIS IS HOW WE FIT IN!," they realized!

The search complete, Ken and Deb bought a "Previously Adventured" Winnebago Vectra motorhome. Remarkably, it had 49 of the 50 things from their challenging list (the one thing missing was the ﻿color﻿ they hoped for).  Before they drove it off the lot, Ken carried Deb up the steps and over the threshold.  They named it, "Faith," as in, "It is Faith the Lord gave us that we would trust and follow Him."  It was only a few weeks later that Ken announced his retirement date (then, still about three years away) to his executive team. They were on their way!
glossary of terms
is full-timing for you?
ENCOURAGE     SERVE     LOVE     EXPLORE