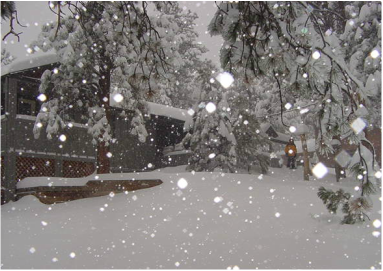 ﻿Deb was born in New Jersey; Ken was born in West Virginia.  They met in the small town of Middletown, Ohio, in the bi-centennial summer of 1976.  Deb, a singer/dancer, and Ken a techie and trombonist, they enjoyed each others' company while performing in a summer-of-fun, traveling show.  Spending more-and-more time together, they fell in love hiking and traveling around Ohio and Appalachia.  They were married a few short years later.  It was only a matter of minutes after their wedding reception that they were on their very first LONG trip together.  Their honeymoon was a trip from Ohio to the magnificent state of Colorado.

Their first LONG trip became permanent.  Colorado provided a wonderful home base for Ken and Deb.  At 8100 feet elevation, their home in the woodsy mountains became a fantastic place to raise their children.  In addition to their many family camping adventures within the state, they took advantage of their central location to make extended trips throughout the country. Enjoying history, geology, and exploring different cultures, the home-school family shared a handful of adventures every year.  They traveled from Maine to Mexico; from Key West to Canada. The kids adapted to travel very well and reveled in anticipation of the next road trip.  The family was fortunate to be able to experience the nooks-and-crannies of each state but one.

In RVing, the family made the predictable migration from tent camping to towables by purchasing a small pop-up trailer. Costing them a whopping one dollar, it was a 1967 Cox with a canvas, fold-up top.  After a little work, the classic trailer became their RV home for many more travel seasons.  For a brief time, they moved up to a very nice Forest River Rockwood.  It was on one of their trips in this travel trailer that were born the dreams of making an even more significant commitment to RVing. 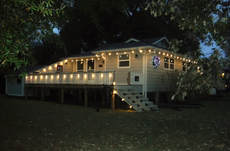 Life happened; Ken and Deb became empty-nesters.  Deciding that they had had enough of the Colorado snow and cold, they decided to change their lifestyle in retirement.  They would sell their stick-and-brick house, buy a motorhome, and change their state of domicile to Texas.  Once retired, they would embark on a service-based lifestyle of Full-Time RVing.  The idea was simultaneously scary and exciting:  to spend some of the years in the next magnificent chapter of their lives in endless exploration of our wonderful country, serving others in a whole new way, and becoming a larger part of God's Story.

The dream of living comfortably in a home-on-wheels while simultaneously serving our Lord and feeding their wanderlust eventually became reality. Ken and Deb full-timed in their motorhome, "Faith," for about three years, driving Faith 20,000 miles and serving at twenty-two SOWER assignments along the way.

​Feeling the need for a place to call "home," they purchased a homestead in east Texas near Lake Livingston.  They quickly named their "stick-and-brick" home, "Base Camp," and have used it as a wintering place to spend SOWER breaks. They have also had the opportunity to share "Base Camp" with other SOWER couples as they have passed through the area. And when the weather turns hot in Texas, they know it is time to get back on-the-road for another exhilarating season of SOWER assignments!